On request of our CEO, Gerd Leonhard, here’s an excerpt from (yours truly) Rudy de Waele‘s shift 2020 Brain Food newsletter, a must read regular newsletter on the digital transformation topics changing our world in business and society. Rudy’s website can be found at shift2020.com. He tweets as @mtrends.

Read below for this week’s edition of Brain Food #11

Also called post-mobile era by some. It’s not a new term, it’s been around for a while, and yet, it was mentioned as one of THE trends at WebSummit this week.

Readers who have been following my activities lately know that I’m scanning this emerging future of us, people being surrounded by technology – moving away from watching screens. For the better, I presume. So, let me introduce you to some of what’s already out there in this post-smartphone era.

First there is the increasingly important Artificial Intelligence (AI) trend. Hardly any day goes by for a company to announce a new product or service using AI. Check some recent posts I wrote for The Futures Agency on this topic.

According Dan Miller – founder and lead analyst at Opus Research and organizer of the Intelligent Assistants Conference,“the growing library of IBM Watson APIs has encouraged over 70,000 developers around the world to get acquainted with the capabilities. This is having a domino effect that results in exponential growth in usage. In a briefing to analysts in late September, IBM provided the following snapshot of Watson’s “Instant Ecosystem”: Over 10,000 apps were in test, controlled experiment, or production mode, and the ecosystem had 350 business partners across 17 industries operating in 36 different countries. Collectively these apps gave rise to a peak rate of 3 billion “API calls” on a monthly basis.”

But there’s not only Watson! Check out the current Intelligent Assistants (IA) wave of Silicon Valley startups using AI. Definitely, one of next year’s big trends. Note there’s as well the notion of Intelligence Augmentation (abbreviated as well IA) as challenged on The Decline of Scarcity blog.

Robert Scoble had a first look this week at the back end brain behind Viv – Viv radically simplifies the world by providing an intelligent interface to everything – And he seemed quite blown away.

And Google’s Smart Reply machine learning software can now reply to your emails. Any day now expected as an update for Google Inbox for Android and iOS.

Personally, I have been playing around with apps like Lark, a wellness IA coach. The app brings the experience closer to interacting with a real-life coach or assistant, in a very communicative mode like having messaging conversations with your coach.

Using Lark on a daily basis, you start to understand that this app is actually leapfrogging many wearables as it’s using the existing sensors already present in your phone. And here is where it becomes interesting to me. We are entering a world of technology that will surround us, always there, nearly invisible but we’ll be able to access it and communicate with it whenever needed.

Now, add psychology to the mix as Alain de Botton does in “Six areas that artificial emotional intelligence will revolutionise”, and you get a whole new idea of how AEI will actually be able to help us in some of the most unexpected area’s, becoming a real alter-ego, as Cicero liked to think of him/her… a trusted friend.

“When people think of how machines will help us in the future, the emphasis naturally falls on the performance of rational executive tasks. But one should also envisage a far more exciting scenario, one in which computational power is also directed at the emotional and psychological dimensions of existence. It is time to imagine not merely AI but also, and even more significantly, what we here call AEI: Artificial Emotional Intelligence.”

Our interaction with technology is slowly starting to move away from screens and is soon to become as seamless as in Her, the movie.
And that was a futuristic movie from only 2 years ago

Apps and connected products will become more intelligent at an exponential rate and conversational technologies are soon to become mainstream.

Welcome to the post-smartphone era!

And so we’re now in for some materials of our recent IoT Shifts activities in Barcelona and Peralada. 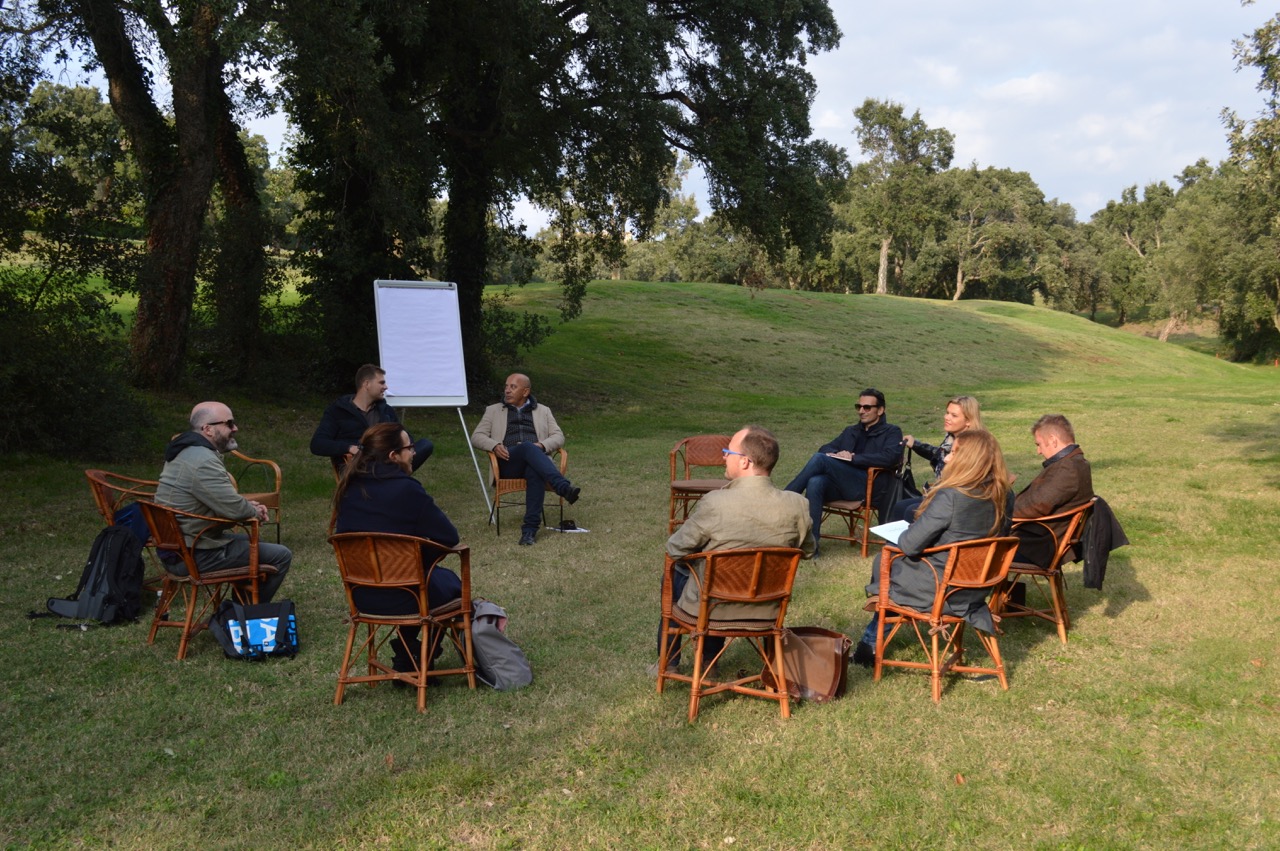 One of the reasons to use Socratic Design as a method during this retreat was to find new ways of thinking to generate solid and creative ideas using technology in an ethical and sustainable way. As technology becomes more dominant every day, there’s a natural reflex to dig deeper into our values, beliefs and purpose. And we need to if we want to create a world better for our children, not to create more waste or useless or silly products.

“Socratic Design is a method and a source of ideas and intuitions. It harvests the created intelligence of a group that transforms into a strong value based community incorporating authentic knowledge with nowadays values and dreams. The method uses 2000 year of creative thinking to create an ethical and aesthetic future, using Socratic Dialogue moderation to free people from addictive thoughts and conformity thinking. It can design from scratch using hyper innovations and classical dreams. It produces concrete roadmaps to transform profoundly and be ready for any uncertainty.” – Humberto Schwab.

And great it was!

It was a real pleasure to see everyone involved and engaged in such a beautiful way that all attendants want to do more using this method. So, we’ll prepare for more. Stay tuned for more workshops we will be organising in the near future.

Meanwhile, read some of the attendants insights and experiences:

“I’m grateful for this experience and highly recommend it. I feel like I have gained valuable knowledge, inspiration, and the wish to learn even more about philosophy. There is so much revelation of truth in it that we can apply to technology and to the age of digital transformation. It is mind-blowing. Also I have made new friends, people who I know will do good in the digital future we are facing. That gives me a really nice feeling of inner calmness. The more of these retreats, and the more people “socratically“ communicating – the less worried we need to be of what’s coming.” – Lilian Güntsche.

When Technology meets Philosophy in a Socratic Dialogue by Lilian Güntsche, CEO & founder of The Dignified Self

How can the Internet of Things (IoT) boost our happiness? by Sergio Mottola, Maker at Nuwe

IoT: Life In A Connected World by Frederic Boulanger, CEO at Macadamian.com

I’ll spare you all the superlatives we received from speakers and attendants after the conference. Here below some feedback we got:

“Great content at IoT Shifts and awesome to meet some many IoT thought leaders” – Wienke Giezeman, Founder The Things Network

“A small and cosy event that brings together some of the best IoT minds in Europe” – Jaime Novoa, Editor, Tech.eu

“From my perspective one of the best IoT events in a long time, very thought provoking and inspiring! I experienced IoT Shifts as a top quality professional event; one step ahead of the usual sales rhetoric and digging deeper into a broader range of application issues and perspectives.” – Lorna Goulden, Director, Creative Innovation Works

All presentations form the conference are now available on Slideshare in two parts:

More media and snippets will be uploaded soon but here are some more links to reviews and impressions:

IoT Shifts in Barcelona – More than just another Tech Conference by Lilian Güntsche, CEO & founder of The Dignified Self

The internet of things and a planetary vision by Kwame Ferreira, CEO Kwamecorp

“Problems cannot be solved by the same level of thinking that created them.” – Albert Einstein.