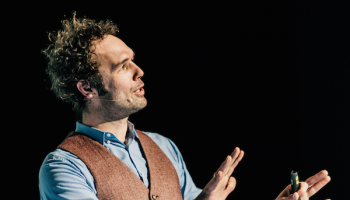 Examining how human behaviour and societal change influence future business has never been more important. Syncing a business strategy with rapid societal changes and dynamic human behaviour is a challenge. Luckily, a new style of expert has emerged, with De Jong proving one of the most successful. Able to use socio-psychological and cultural change to meet the strategic needs of different industries, it is little wonder he is becoming one of the most sought after speakers of his generation.

After studying cultural studies and international business, he wrote his Master’s thesis on subcultures and started his working career in journalism.

In his role as editor-in-chief of a youth platform (magazine & website) he discovered his passion for interdisciplinary people research and started working as a youth and media researcher for Science of the Time and FreedomLab Future Studies. In 2007, de Jong took the role of Insights and Strategy director for TrendsActive, an international trend interpretation agency. In this role, he travelled the world consulting and presenting to numerous multinational companies. In 2010 he starred as a jury member in Holland’s Best Idea – a primetime TV-show. In 2011 he co-produced an executive programme for decision makers at Utrecht University on the topic of using sociocultural trends for strategic decision making.

In 2014 he started Whetston / strategic foresight, a think tank on future human behaviour and societal change and the impact on strategic decision making. His company specializes in keynote presentations and workshops.

De Jong is determined not only to inform his audience of research, insights and business cases, but also to provide them with practical strategic take-aways on how to utilise the information and help their business grow.

Thimon de Jong on the Web